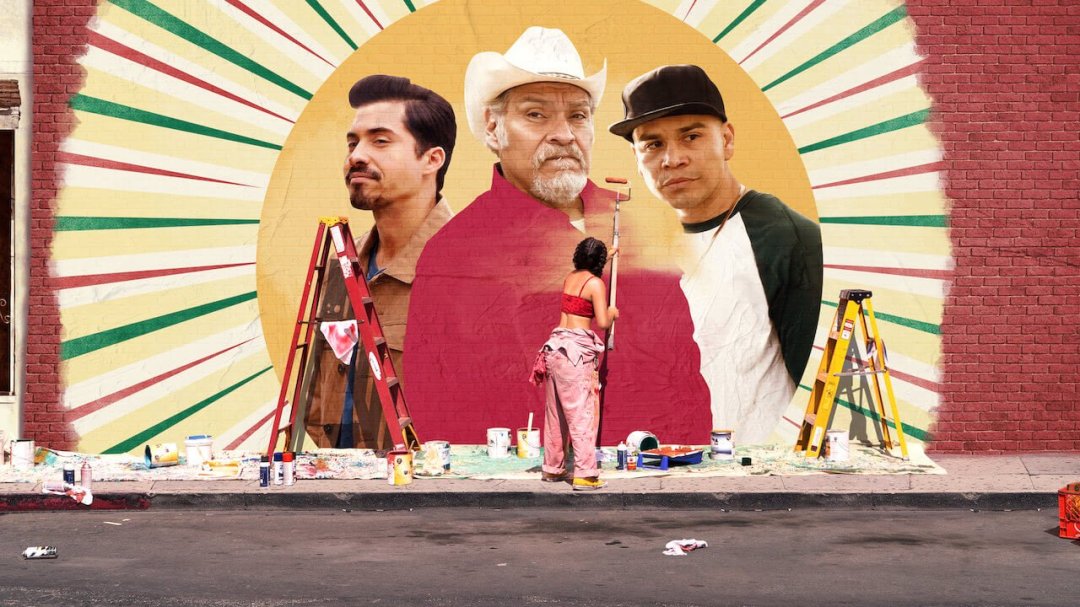 His dream is written in Spanish: juggling of identity in Netflix’s ‘Gentefied’

This article was featured on Medium TV.

The song “Ojos Del Sol” by Y La Bamba plays over a scene of a father and son waking up in their van and eating Pop Tarts. The song carries through the rest of the two minutes of the episode as both prepare to leave Los Angeles permanently for a town two hours away. Following a pretty matter-of-fact scene in which the son confesses his feelings for a classmate, the episode ends with the father and son looking longingly at the school as they finally set out, tears welling up in their eyes, but nothing compared to the waterfall flowing out of mine, and probably everyone else’s watching it.

This heartbreaking moment in the sixth episode of the Netflix show Gentefied presents a straightforward conclusion to one of the many complicated narratives revolving around Hispanic families growing up in East Los Angeles and dealing with rapid gentrification. The principal family consists of members of various parts of the spectrum: a patriarch who has maintained his and his late wife’s taco restaurant and is struggling to pay the rising property costs; one grandson who has stayed with the family business and whose life is about to change due to an unintended pregnancy with his on-and-off girlfriend; another grandson who grew up more privileged and went to business school and now struggles with identity issues; and a granddaughter who is queer and a starving artist. Given this diverse dynamic, many of the confrontations of gentrification present a gray area that is rarely considered in public discussion.

I have had a privileged and struggle-free life, which diminishes my credibility to speak on the effects of gentrification on these characters’ lives considering that at some point, I have fueled the fire in my own life. This initially brought up a feeling of reluctance in my decision to watch it, feeling like I couldn’t relate or have a valuable insight, but there was one door that opened the rest for me as I got further into the series: the show’s focus on identity, and which identities are worth fighting for and embracing. I see this struggle most emphatically through two characters–the granddaughter and artist, Ana, and the mariachi singer and father mentioned in the beginning of this article, Javier.

Ana has perhaps her most emphatic cultural reckoning when she gets offered a new commission of a mural on the side of a bodega, owned by a not-so-humorously ignorant developer Tim and operated by an old Mexican woman, Ofelia. Conflict arises when her mural of two luchadores kissing as an expression of queer solidarity is met with disdain from the Mexican community living there, as well as from Ofelia–who, despite being accepting of homosexuality, is upset that Tim didn’t ask permission to put the mural up. Later as the principal characters discuss it, Ana’s girlfriend proposes that it’s not black and white; while Ofelia deserves the respect of having a say in the decision, queer brown communities deserve the right to expression and representation.

But Ana’s unsolvable clash of identities worsens in her quest to make things right, influencing cash mobs to buy Ofelia’s products so she can afford rent for the next few months, inadvertently presenting the dangers of her followers’ privileged “wokeness,” as awareness won’t replace the long-term customers who have quit going to her shop because of the mural. We see Ana as a placeholder for many first generation children just wanting to help, finally conceding to the reality that while first generation children aren’t the source of all problems in our communities, we also aren’t the solutions we thought we were. Often the new values we adapt to in the United States are the same ones that diminish the ones we were raised with, even if we’re not directly involved in diminishing them.

We see Javier face a similar truth on the opposite side of the spectrum in an episode solely dedicated to him, as he struggles to make his dream of becoming a Mexican folk singer come true when his mariachi sings to white audiences who only want to hear English-speaking music. Struggling to find a home for his wife in Tijuana and his son who stays with him, he must resort to choosing between his passion and responsibility. The clock ticks as the father and son have one week to decide if Javier takes his brother’s job offer and they move to Bakersfield, or if he pursues his passion and lives paycheck to paycheck until he gets his big break.

The true conflict and heartbreak in Javier’s story is his unwillingness to adapt to people’s desires in Los Angeles. Viewers are slapped in the face with the realization that Javier can speak fluent English all along with a perfect American accent, and can sing it even better, which leads his mariachi to gather exponentially more tips than their past gigs. Yet, Javier decides to move to Bakersfield anyways. We realize the dream is not worth fulfilling for him if he can’t have it on his own terms, because his dream is written in Spanish. In giving it up, he sacrifices his potential to make a livelihood out of singing, but he keeps his pride in being Mexican and speaking and singing in Spanish. For someone without a home, that is the only part of his identity that he can hold onto.

While the rest of the stories in the series do a wonderful job of emphasizing real struggles with identity, these two speak the loudest about what it means to embrace it. Gentefied asks us how we express our love for ourselves without diminishing that of others in our communities, as well as how important our identities are that we are willing to sacrifice our dreams to cling onto them. In doing so, it makes us realize the truth that awareness is only the first step in preserving heritage, especially in a world where money rules everything. The solution is much more complicated, and not one that a simple 10-episode series can provide. But it gets us closer to collectively considering the solution as it begs us to ask: Are our big dreams too selfish? Do our dreams require the permissions of others? Does the preservation of our culture depend on only the preservation of our families, or is there a larger force that enables communities to thrive?

Writing selfishly to grasp my own identity. View all posts by Ali Haider

This site uses Akismet to reduce spam. Learn how your comment data is processed.